The Nernst and Goldman Equations

In any science class, math is used to describe phenomena quantitatively. In neuroscience, we use math to describe the conductance of ions and the permeability of the neuronal membrane to ions.

There are two equations, The Nernst Equation and The Goldman-Katz Equation that describe the conductance and permeability of neurons’ protein channels that allow ions to flow, creating current and thus, an Action Potential.

I barely understand the concept myself, which is why I’m writing this article to start to acquaint myself with the ideas that lead it around. 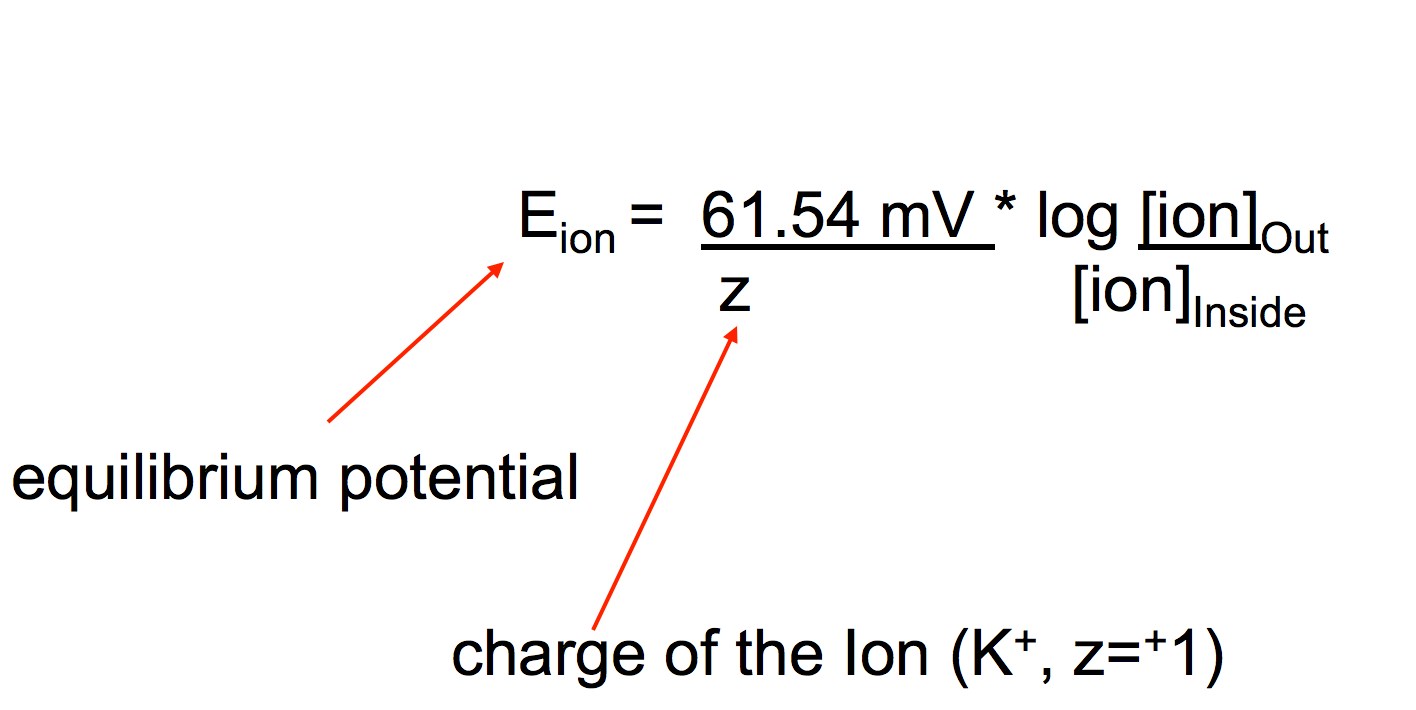 The Nernst Equation describes the permeability of the cell membrane to a particular ion, for example, Na+. Ions want to go to a more positive place, whether inside the cell or outside the cell.

The equation above is a simplified representation of the Nernst Equation. This equation is built for the human body at a temperature of 37’C.

The Nernst Equation deals with the two functions that drive action potentials: diffusion and potential difference. As temperatures rise, the rate of diffusion will increase. Thus, Eion is directly proportional to the temperature. However, as the charge on the ion increases, the number of ions needed to balance diffusion decreases as potential difference takes up the heat. Thus, Eion is inversely proportional to the charge of the ion.

The equilibrium potenial for an ion is the voltage difference needed to balance that ion’s concentraLon gradient.

The closer to 0 the Eion is, the less driving force acts on the ion to move either in or out.

The more negative an Eion is, the more likely it will move into the ion.

The less negative an Eion is, the more likely it will move out of a neuron.

The Goldman Equation is the mathematical relationship between the permeabilities of all ions with channels in the neuronal membrane.

If two or more ions contribute to the membrane potential, the Nernst potential no longer yields the Vm. In this case, use the Goldman-Hodgkin-Katz (GHK) equation to calculate the Vm.

In simple language, this equation describes why the Vm of a neuron isn’t equal to any one Eion value: there are more than just one type of ion channel in the cell! This describes that ‘average’ by dividing the permeabilities of the ionic channels inside the cell to those of it outside.

What’s Driving all of these forces?

What will determine the direction in which a molecule diffuses?

Depending again on the charge of the ion, whether it’s cation or anion, it will move in or out of the cell.